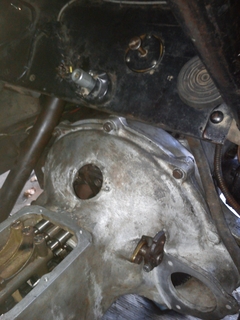 All of the money I make from the weddings is re-invested in the cars and each year I undertake a little project. Previously, I have upgraded the electrical systems, fitted indicators and brake lights, had an engine re-built, re-sprayed a car in old English white as well as having new leather upholstery fitted to a car. Over the past six months or so I have been attempting to sort out the noisy and clunky gearbox in the New Zealand car. The chap from whom I bought the car had fitted a gearbox from the early 1920s and, although it worked in a 1927 car, it was not the correct unit and it wasn't in the best of condition. The thing was noisy and changing gear was hard work, so it had to go.

I had a spare and correct 1927 gearbox in my shed. But this hadn't been used for many years and needed a full restoration. So off it went to Tom, who is one of the leading vintage Austin cars to fit a brand new set of gears as well as new bushes and bearings. Specialists like Tom are always extremely busy but he is a kindred spirit in the sense that he also has some vintage Austin cars that he uses for weddings, and he kindly agreed to fast-track my work. This has now been completed and I took delivery of a perfect gearbox, only seven months after the old unit first went to Tom's workshop. There were a few complications during the course of the work so seven months is entirely reasonable.

I braved the cold and fitted the gearbox recently. It seems to be working well but I need to give the car a few good runs to make sure everything is working properly. The recent snow has been a set-back but time will have to be found to thoroughly test the car before its first wedding of 2018 in only three weeks time. The whole exercise has been expensive and time-consuming but it is one more step in the process of improving the car and putting it back to the condition it was in when it left the factory all those years ago. Let's hope it has all been worthwhile!