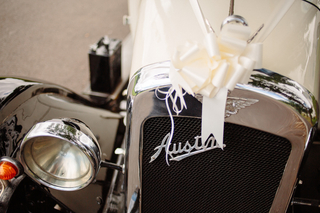 I have been plagued with annoying squeaks recently. Well, to be exact, the cars have been squeaking and I have been annoyed. The first unwanted noise started on a wedding a few weeks ago. The car behaved perfectly on the drive to collect the bride, but after she, her Mum, her Dad and flower girl all got in and we set off to the Church, the dreaded squeak raised its ugly head. There was no loss of power so I carried on and delivered the customers safely to the wedding and the reception. The strange thing was, that driving home without any passengers the noise disappeared. In fact, it was absent during the following few days whilst driving around. After much investigation, I eventually deduced that the problem only occurred when the car was carrying a full load and I was able to recreate it by stacking old paving slabs in the back of the car. This was fine but pinpointing the source of the squeak was tricky because noises tend to get transmitted through the vehicle. I changed the fan belt, greased the fan bearings, checked the water pump and the rear wheel bearings, all to no avail. Eventually I checked the prop shaft joint and found it to be very loose. A good squirt of grease did the trick and all was well thereafter.

Everything was absolutely fine for the next week and then, disaster! Out of the blue, the other car started squeaking. Arrgh!! But it wasn't just when the car was fully laden, it was all the time. And the noise was getting worse by the day. Another week of 'hunt the squeak' ensued and I spent hours tracking it down. This time it turned out to be the fabric coupling at the front of the prop shaft. Luckily this was quite an easy fix and the car is now behaving perfectly.

The cars aren't usually so troublesome but I suppose dealing with these problems is part of the fun. There is a great satisfaction in diagnosing and fixing a problem but I could do without the pressure of problems arising at the peak of my wedding season.